Very exciting news, our one bathroom no longer has a kitchen sink and sprayer... 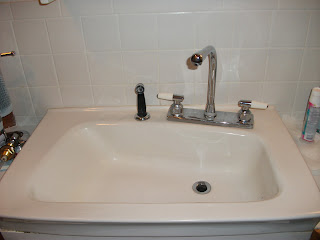 Here is it the bathroom sink with the kitchen faucet.  Unfortunately the arc of the faucet causes a lot of spraying and splashing.  Also the sprayer nozzle does not work.
The sink is an interesting shape.  I think it may have come from the kitchen (there is evidence of a remodel in that room).  Some think beauty-parlor (although there is no neck rest)...some think it would make a good sink for bathing an infant.

I have no issue with the sink.  Just the faucet.  And the cabinet...and the stenciling...

Here is a photo of "during" where you can see my wonderful plumber (aka Dad) and his side-kick doing some serious work.  Note the matching sweaters (hmmm....).

We cleaned a lot of guck out of the drain.  Rory really enjoyed the sprayer nozzle.  It made a nice small gun and even squirted water at times.  Such fun.  He kept it trained on Bup to make sure he stayed on task...

The job went surprisingly well - only two gliches (really!  only two!).  We found out one of the pipes by the trap is undersized.  Dad got a little wet with that discovery when the trap came off in his hand.  We also added a soap dispenser where the sprayer was, but need to sawzall a board to attach the soap bottle... 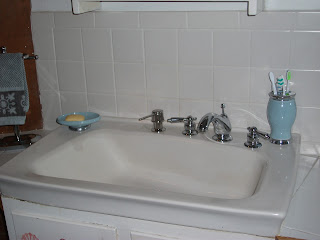 
Here it is - as promised and of course looked forward to - a picture of the glorious basement.  Now keep in mind this gem of a cellar gave us some serious pause when considering the purchase of the home.
Let me describe what you are viewing here:

Here is a close-up of the stairs.  T added two support columns under the (undersized) beam.  The beam is too small and failing to hold up the house which is causing the stairs and kitchen floor to sink.

T borrowed a special drill from a friend so he can drill through the concrete floor (thankfully in this case the concrete is not very thick) and dig new footers for new stair supports.

We hired a contractor to come re-support the beam and jack up the sinking house and rebuild the stairs.  We gave him a check for supplies in February and haven't seen him since...  Also not a good sign.  T has taken to calling him every day to try and get a time frame out of him.  You think you can throw money at someone and get the job done - but that is so not the case!

More pics of T's cement work coming soon...I think those pictures are in his camera.
Posted by Unknown at 7:59 PM No comments:

Email ThisBlogThis!Share to TwitterShare to FacebookShare to Pinterest
Labels: basement

This is what happens when your life is taken over by a home renovation project...

T is doing a fantastic job "watching" the kids.  If he could only put down that back issue of Family Handyman...

Good thing it's not a full size pool.  Nobody drown!  And better yet - don't splash him!

Should we be concerned?
Posted by Unknown at 8:37 PM 1 comment:

Progress is being made folks - thanks to our good friend Thom who brings to the table some excellent carpentry skills.  The wall is up and level.  Next onto moving pipes, calling the electrician, and designing a built-in bookcase...and of course ripping down more walls!

Some pics to bring you up to date:

The wall you see behind this wall is the dining room and most of that will be coming down - the rest will stay or become a closet.  Yes T will be patching that hardwood in front of the wall - better add that to the list...
Posted by Unknown at 2:35 PM No comments:

﻿
I am sorry to say that we used to have a long-haired black cat but once we moved she became a chicken...

The Story of Spooky the Cat...
Pilchy, our cat that we loved had been missing for eight weeks and we had put out flyers, tried to coax another gray cat out of a neighbors yard (turned out not to be our cat) and had basically given up on finding her.

The kids and I had visited two animal shelters but found them overwhelming - how do you choose between so many kittens and cats?  I saw an ad in the paper from animal control in Millbury.  Someone had dumped kittens off and they were looking for a homes.

When we arrived they had one cat left.  I had neglected to ask about it's hair length on the phone and found myself looking at a long haired black kitten.  She was very sleepy and sweet, with a laid back personality and seemed to like the kids.  I did not want a long haired cat, but how do you walk away from one cat that really needed a home when you've got a home really needing a cat?

So we brought her home and wouldn't you know it at 3 a.m. the following morning our old cat decided to come back home.  I am convinced that she heard the word on the street that we were replacing her...  So then we had two cats.

Anyway, we named her Spooky because she was black (Cassie's friend calls her creepy).  She seemed to like our old cat and her new home.  We had her fixed and wormed and got her up-to-date on all her shots.  She enjoyed going out at night and actually was a pretty good hunter, which was surprising based on how lazy she is -- always lounging about.

Once we sold our house we had a gap in the closings and spent the night at a friends.  It was a very good friend who let us bring all our crap plus our two cats and three children!  She did not like the move.  She spent the time hiding behind the dresser and then escaped and we found her hiding in the back corner of the garage.

We got her safely moved and settled in the new place, but she refused to go outside.  She sat around and ate and slept and showed signs of cat depression...  If we forced her outside she hid under the house until we let her back in.  This has been a pretty cold and snowy winter and neither of the cats have wanted to go outside much.  I am hoping that once spring comes it will change her mind...

In the meantime she has been sleeping and eating a lot.  She looks like she's gained quite a bit of weight since moving and I swear she is as heavy to pick up as my three year old even though the scale says 15 pounds.  We have renamed her the big black chicken, also known as Large Marge.  I am going to have to find a way to make her exercise.

I guess you can't always successfully bring a city cat into the country.  She is scared of the place!  Maybe it's the goats and donkeys in the neighbor's barn, or the pack of dogs up the street, or the coyotes howling at night?  Regardless, we can't help but hope that our large furry chicken will soon turn back into a cat.
Posted by Unknown at 2:11 PM No comments:

I was supposed to be cleaning....

...but made the mistake of starting in my bedroom.  I noticed a corner of the wallpaper sticking up and just for fun decided to peek behind it.  I found purple paint.  I pulled a bigger piece up and sure enough the wall is painted purple under the (hideous) wallpaper.


My daughter who was home with strep throat caught me and joined in the fun.  My 3 year old decided to "drive" the paper from the floor to the trash bag with his dump truck.  We peeled/scraped what we could in the time we had and without a ladder to reach the top.  We had to abort the mission before completion due to the need to move on to clean the bathroom.  I wonder when I will have a chunk of time to finish what we started...

I do think I prefer the purple over the wall paper, even with the little bits that are still attached here and there.  We still have the ceiling/eave wall covered in wall paper.  We will eventually rip these walls down (they are the worst wall-board job we have seen in awhile and we need to insulate) so I am not going too crazy...

What do you think of the new look? 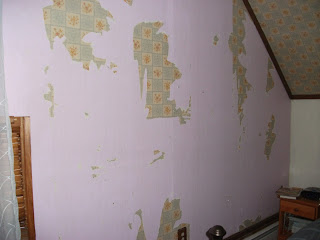 Email ThisBlogThis!Share to TwitterShare to FacebookShare to Pinterest
Labels: bedroom

My husband has invented a new bird feeding technique.  Most people buy feeders and birdseed for their feathered friends, but not us.  We have found that birds (especially bigger birds) really enjoy a nice freshly killed mouse for lunch.

Yup it's true, we are recycling our mousetrap casualties into bird food.  Yum...

Everything you wanted to know about American crows include diet (see below)  from the Common Crow.

A major food source of crows is carrion. They are often seen eating dead animals on the sides of roads (or in our yard).
Posted by Unknown at 7:35 PM No comments:

Email ThisBlogThis!Share to TwitterShare to FacebookShare to Pinterest
Labels: mice

Snake in the kitchen!

The husband was home sick, but has trouble lounging in bed (or sitting still) and decided to clean something.  He likes to clean big things - the basement, the refrigerator, the cars.  He decided to tackle the kitchen which had been fairly neglected due to my work schedule...

He was vacuuming around the cat box and decided to pull out the refrigerator to clean back there.  This is usually a productive cleaning spot what with cat hairballs and what not.  You never know what treasure you might find back there!

Once pulled away from the wall he noticed a rubber snake (with kids a rubber snake behind the fridge is par for the course - don't even get me started about what I find in the couch cushions).  The snake was coiled around the baseboard heater.  However,  it moved when he touched it.  He realized this was no rubber snake but a real live one that had been living in our kitchen for who knows how long!

Thankfully I have a husband who is comfortable handling snakes.  I am glad that it was not me who found the thing.  That might have required major retail therapy and a night at a hotel!!!  Anyway, I got the phone call to address the big question of whether he should save the snake to show the kids or whether they would be horrified to realize that things like this are lurking in their kitchen...

I opted for saving it for their viewing pleasure, after all it wasn't like we found it in their bedroom.  They seem to take the finding of the snake in stride.  Maybe the finding of the squirrel and the regular deaths of field mice have increased their acceptance of cohabitation with outside creatures... Don't worry, the snake was safely released into the backyard and hopefully will stay out of the kitchen.

I just peeked behind the fridge and so far so good - no sign of the snake...
Posted by Unknown at 6:51 PM 1 comment:

My Review of Mitten Tree

Our freestanding Mitten Tree is a great space-saver for storing and drying mittens, gloves, socks and hats. Place it next to your hearth or stove for a convenient way to dry your damp winter wear.

Great in the kitchen too for drying plastic storage bags or dishrags. Tubular steel.

We were using a big drying rack for winter hats and mittens. I love this one! It has plenty of space for three kids gloves and hats. We don't have a fireplace, but placed it next to the baseboard and they dry quickly. I have recieved so many compliments on it!

Posted by Unknown at 1:16 PM No comments: